The Goods Yard opened in March 2008 on the site of the former Railway Hotel, Broadstone and under the watchful eye of manager Jenny it has established itself as Broadstone’s finest free house.

The Goods Yard will temporarily close on 4 September 2022 while building work is carried out on the adjoining site.  The pub will reopen in 2024, and we hope all our loyal customers and friends will be back at the bar before we all know it!

The Goods Yard has always offered a traditional bar and restaurant, with leather sofas, real log fires in winter and a large outside terrace. We pride ourselves on real food, real people and a massive choice of beverages from real ales to lagers, and wine to our special top shelf.

Following a refurbishment in 2016, The Goods Yard is now better than ever and our team look forward to welcoming you to the best free house pub in Broadstone.

As for the name?

When naming the pub we wanted to remember its history, but also make a clean start, breaking from the problems of the past. The Goods Yard was the answer. 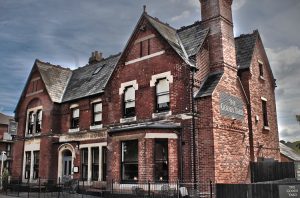